Alicja Musiał, a software developer and a huge enthusiast of space technology, had always dreamt about a mission to the Moon… and… she has just kind of done it :). Currently, she is working on the satellite on-board computer software Oryx in our company, but the programming seems to be not enough if space is awaiting…

How did it all start?

I’m pretty sure that it was a long time ago. As a child, I always dreamt about piloting a spacecraft, floating in microgravity, and finally – putting my foot on the surface of the Moon. In addition to the stacks of space-related books I had accumulated, I even had a Mir Space Station model hanging from my lamp. As I grew older, my space goals started to seem to be a distant reality, quite unreal to fulfil, but after spontaneously managing to get involved in the KRAKsat project, I realized that it was not as far as it had seemed! Now, working in KP Labs, I can create space code daily, which is still a kind of crazy thing for me. But… not as crazy as spending two weeks on the Analog Mission in the LunAres Research Center!

So, what steps did you take to participate in the mission?

When I first heard about the analogue missions that are performed here, in Poland, I couldn’t believe that such a possibility could be so close. I filled in the online registration form with a motivation letter attached and impatiently waited for the answer. This kind of experience could be a once-in-a-lifetime opportunity not only to participate in extremely valuable research about the human predisposition for real missions but also to see how I, personally, would feel and react in such a new environment. When my application was accepted, I was thrilled, but also a bit anxious – with no idea how the mission would look. Two weeks in a closed bunker with little or no contact with the external world? Performing strictly defined top-down tasks day after day? With limited resources like water?

Fortunately, the mission proved itself to be one of the most remarkable experiences in my whole life.

What is the Analog Astronaut mission anyway?

One of the most important reasons to do analogue missions is to see how astronauts adjust to unexpected situations. Key features of spaceflight missions and operations can be tested here on Earth – including how to manage limited resources, closed environments, and the lack of sunlight. With the growing interest in human spaceflight, more and more studies are being proposed to analyse all aspects of the space mission before the actual launch. This includes the psychological side and the impact of isolation on people, as well as the procedures, performance, prototypes of tools and accessories, etc. Especially in human spaceflight, all aspects of a mission have to be tested before the launch, to identify and solve potential problems that could result in fatalities in real space. This is why the Analog Astronaut crewed missions take place here on Earth – basically to test us under extreme conditions.

Who else was in the habitat with you?

Our team was international and included 6 space enthusiasts. Aleksandra Kozawska, service designer – who used to work at the European Astronaut Centre, a biomedical engineer Sara Sabri – acting as the mission Medical Officer, Marcin Baraniecki – an amazing photographer and software engineer, satellite engineer – Eduardo Salazar Perez, our commander and widely known explorer Benjamin Pothier and finally… me :). There was also a defined Ground Control who gave us tasks and oversaw the mission from Earth – which included Leszek Orzechowski and Agata Mintus, the founders of the LunAres Research Center. 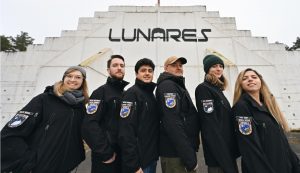 The diversity of professions and characters gave us a great opportunity to learn from one another and share our experiences. Our mission decided to adopt the name Orpheus 11 🙂

It’s not rocket science! Not only were we the eleventh mission in the LunAres habitat, which is coincidentally the same number as the Apollo spacecraft – the first on the Moon, but also Orpheus is, in mythology… Apollo’s son. It all makes sense now, doesn’t it?

Ok, so how did the mission look in practice?

For two weeks, from the 14th to the 27th of February, we were locked in a post-nuclear bunker located in Piła. It is worth mentioning here that the Polish LunAres Research Center is unique in the world in terms of its simulated EVA – with its indoor EVA area that is almost 250 square meters in size! And it does its job. I was incredibly impressed by the levels of immersion that were achieved during our “moon-walks”.

Coming back to your question – our daily routine in practice revolved around an agreed schedule we were obliged to follow. Every workday started around 7 am and just after the simulated sunrise woke us up, a morning yoga session was carried out (the best part of the day!). After a half-hour workout, we prepared our freeze-dried breakfast (with three different porridges to choose from) and after some small talk – we diverged to our daily activities (often starting with a briefing with Ground Control). There were a lot of habitat tasks that had to be conducted every day – getting readings from greywater usage sensors, taking care of our plants, cleaning… not to mention the research for the medical and psychological experiments we were part of – filling out psychological questionnaires and daily med-checks quickly became our habit.

Every two days a simulated EVA was performed. This activity required a huge effort from the whole crew, who had to cooperate efficiently to prepare everything according to schedule. Numerous checklists and procedures needed to be followed to successfully organize the activities on the Moon – to prepare the astronaut suits (including parts of old Russian jet pilot suits adapted for this purpose), get dressed, prepare the HabCom and LEO Rover… these were only a small part of all the preparations.

What was the most exciting thing for you during the whole mission?

The one thing that I loved the most in LunAres was the simulated EVAs (extravehicular activities). As mentioned earlier – we had an enormous area in the hangar itself to simulate the unfriendly Moon environment, where the missions could be performed. Between our habitat and the terrain an airlock was placed – before and after every EVA there was a 5-minute depressurization time needed. Every EVA had its scenario, which we planned carefully with the Ground Control team, to be able to test our tools’ prototypes, emergency procedures, and the rover. When you think about astronauts jumping on the surface of the Moon (or even falling), the fact that strikes us the most is how limited their movements are. Bulky and uncomfortable suits, the inability to bend or squat… this could be a real problem if anyone falls, drops their tools or simply wants to take a soil sample. This is why one of the main goals of our mission was to prototype and test accessories that could be usable in such conditions – and by simulating a real astronaut’s inconvenience (using e.g., parts of exoskeletons) it was possible for us to try them out during the EVA. There are not many articles available about designing these kinds of tools, but I managed to find one from Apollo and one about the planned Artemis mission, so we based our research mostly on these two papers. We managed to fix a gripper created by one of the previous teams, design our own scoop (based on the Apollo designs) and start the development of a new pair of tongs for larger rock samples. I also worked on a project especially for the simulated EVA – a tablet chest holder for the Analog Astronaut, while Eduardo designed a simple but much-needed handle for the Leo rover. 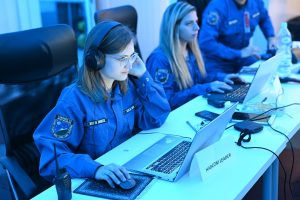 What did you learn during the mission?

The greatest part of the mission was of course the scientific experiments and personal projects. Each of us had some part of the schedule adjusted to perform all the planned activities. Personally, I was responsible for prototyping new tools for the EVA and taking care of the plants in the Biolab – together with Ola we managed to grow some lettuce and spinach on the hydroponics and aeroponics stands using the greywater from the tanks (gathered from the hygiene module). Learning more about biology and chemistry was something new and really inspiring for me – I even created my own small aeroponics stand in my house a few weeks ago and watching the plants grow, reminds me of the LunAres adventure.

From the technical point of view, my favourite project conducted during the mission was building the SatNOGS ground station and antenna to listen to the satellites from the habitat. You can read more about this initiative on my blog.

Having our water resources limited was also an interesting experience. There was an innovative greywater collection system installed, which allowed us to use water from showering and sinks to flush the toilet. It proved that you can really live ecologically using as little water as possible and reuse it when needed. No more rethinking your life choices with streams of hot water gently flowing over your body :). One quick shower after the one-hour training was all you had!

In the end, what was the funniest thing you experienced during this mission?

Probably… the saliva collection experiment. Three times during the mission, we had to spit into the special containers and lock them in the BioLab fridge. I never thought that it would be so hard to create 20 millilitres of saliva and that it takes such a long time! But you know: it was all for science!

There are quite a few habitats all over the world, so I’m pretty sure I’ll visit more one day. It was a bit tough, but an extremely valuable experience and I would love to repeat it in the future. Although coming back to normal life after the mission is quite hard, those two weeks were something that can change your world perception permanently.

So, would you recommend it to everyone?

The whole Analog Astronaut experience is great, so yeah, definitely. Now, three months later, it seems a little bit unreal, like a cosmic dream, but the impact of this experience will stay with me for a long time. We completed so many amazing experiments and research that it’s hard to believe that it was only two weeks. If you dream about space or would like to test yourself in such conditions – just go for it! It’s worth it all.