Last month, the KP Labs programming team finished developing a new version of the software controlling the PW-Sat2 satellite – the fourth Polish object in space. PW-Sat2 was built by the students of the Warsaw University of Technology form the Students’ Space Association at the Faculty of Power and Aeronautical Engineering. The goal of the mission, which started in 2018, was to test an original de-orbit mechanism (“a sail”), which purpose is to expedite the disposal of unutilized objects from the geocentric orbit, thus decreasing the amount of the so-called “space debris.” As a result of the project, the satellite will burn up in the Earth’s atmosphere as soon as at the beginning of next year, rather than in a dozen years or so. 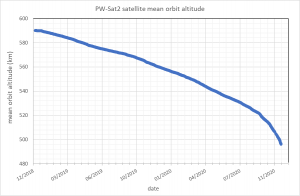 The work done by the KP Labs software developers is related to the cooperation agreement signed this year with the Warsaw University of Technology, Faculty of Power and Aeronautical Engineering. According to the agreement, the next student satellite, PW-Sat3, will utilize the original solutions developed by KP Labs: the Oryx software and the on-board computer Antelope.

Why was the new software developed?

The software initially controlling the satellite was designed predominantly to fulfil the goals of the mission: to deploy the sail and conduct several smaller experiments. After completing the main phase of the mission, the satellite was still fully functional; however, it turned out that deploying the sail had changed the satellite’s energy budget so that it started to slowly discharge. To avoid a full discharge, simplified, energy-saving software was developed. The new software was re-uploaded in March 2019. Since then, PW-Sat2 has been in the so-called “Deep Sleep” mode.

Currently, KP Labs is creating original modular software named Oryx for an on-board computer that is also being developed by the KP Labs engineers. While working on the new software, the team devised a plan to improve, expand, and validate the software in real conditions and gather new data. To accomplish this, the Little Oryx project was conceived. Aside from saving energy and maintaining a positive power budget on the PW-Sat2 satellite, Little Oryx contains key components of the Oryx software. 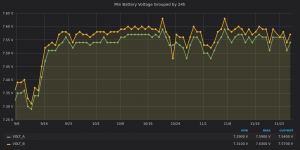 Little Oryx – from conception to upload

The project started with writing the key logic of the PW-Sat2’s on-board computer in the area defined by the specificity of the Oryx system. It comprised of libraries written in C++ containing crucial on-board modules for telemetry and telecommand, a hardware abstraction layer, and a set of drivers for the on-board devices. The entire process of software development occurred simultaneously in an emulated environment and on physical engineering models of the on-board computer, connected to the other units by the Oasis module created in KP Labs.

The next stage involved testing on the so-called “Flat Sat” – the closest possible copy of the equipment present on the satellite in orbit. Finally, on 21 October 2020, the tested and validated code was sent by radio to the satellite, using a ground station. The entire upload operation lasted approximately one and a half days.

What’s next with Oryx?

Currently, KP Labs is focused on developing the Oryx software, which will probably be used in the satellite Intuition-1 project. The main aim of the mission will be hyperspectral Earth imaging and in-orbit data processing in real time. Moreover, Oryx will probably be used in the PW-Sat3 mission, planned for the third quarter of 2023. Together with Oryx, the on-board computer Antelope engineered in KP Labs will also fly to orbit.

Uploading the new software to the PW-Sat2 satellite was a valuable experience, which allowed us to verify the functioning of the Oryx modules in real conditions in orbit and to gather important data we can use to improve the software’s further development. The mission was successful, resulting in PW-Sat2 maintaining a positive power budget. Additionally, expanded with new functionalities, the software will allow the satellite to work properly until its de-orbitation, which is planned for the beginning of next year.

Little Oryx was tested by a team of KP Labs operators until mid-November. The team monitored the satellite’s power budget, which remained positive. The implemented functionalities performed well and all other tests had good results.