Since 2021, KP Labs has been working with the Space Research Centre of the Polish Academy of Sciences (CBK PAN) to develop the Global Solar Wind Structure (GLOWS) photometer for NASA’s Interstellar Mapping and Acceleration Probe (IMAP) mission. GLOWS will be one of ten scientific experiments onboard IMAP. The instrument is being designed and assembled at CBK PAN. Scheduled for launch in 2025 on board a SpaceX Falcon 9 rocket, the IMAP spacecraft will be positioned at the first Lagrange Point (L1), orbiting around the Sun roughly 1.5 million kilometers from Earth.

Twenty-four top research organizations and universities worldwide are collaborating on the suite of IMAP’s experiments to study the heliosphere. The heliosphere is the outermost region of the solar atmosphere, formed by the steady flow of charged particles – the solar wind – and the magnetic field that bubbles out into the solar system. Studying the heliosphere and its interaction with the interstellar medium is critical for advancing space science and engineering, including the near-term plans for crewed missions to the Moon and Mars. The heliosphere impacts the entire solar system’s environment, shielding  Earth from cosmic radiation and determining  habitability.

Heliophysics missions over the past decades have advanced the scientific knowledge and understanding of the sun and how space weather challenges space technologies. However, IMAP researchers point out the mysteries that remain in the solar wind’s rate of acceleration and interaction with interstellar space. GLOWS is the first instrument for a NASA-led mission fully built in Poland by CBK PAN. It will measure the ultraviolet glow from the distribution of interstellar neutral hydrogen (ISN H). KP Labs will develop the autonomous computing stack for GLOWS, demonstrating once again how advanced space exploration can be fostered by innovative hardware and software.

KP Labs is developing the on-board Main Application Software for the GLOWS instrument, which will handle the telecommand and telemetry as well as the autonomous collection and archiving of scientific data. This robust autonomous software will also manage and supervise GLOWS’ hardware, support several operational modes, and interface with the IMAP operating system. In addition, given the impact of the communication time delay and the constraints on GLOWS’ communications link, the on-board software will process the scientific data, reducing the computational complexity.

KP Labs leverages open-sourced computing stacks such as the YAFFS file system and RTEMS (Real-Time Executive for Multiprocessor Systems), intending to open-source some of the mission’s software components to benefit the scientific and engineering communities. Multiple open source tools are also being used for the software development and testing, such as the GCC compiler, QEMU emulator, Python programming language, multiple open source code libraries, and the Git version-control system.

Grzegorz Gajoch, electrical and embedded systems engineer at KP Labs since 2019, is a member of the team developing the GLOWS hardware and software stack. Gajoch is a seasoned electrical engineer with a background in FPGA-based systems and low-level programming, having supported CubeSats and larger-scale space missions.

“One of the key features of KP Labs is the broad knowledge and deep expertise to develop modular, adaptable, conventional and AI-dedicated software and hardware,” explained Gajoch. “Since most of the team comes from professional software development, we apply good software development practices and perform extensive on-the-ground testing and simulations. Furthermore, by pushing the hardware and software limits, we ensure optimal performance before launch.”

Indeed, computer simulations are vital for more fault-tolerant and smarter space applications. KP Labs’ expertise includes the hardware, software, and algorithms designed to process on-board data like a Smart Mission Ecosystem (SME). SME is an ecosystem of intelligent products and solutions based on artificial intelligence to accelerate space exploration and enhance mission safety.

“If we want to simulate an unforeseen event,” continued Gajoch, “causing a critical error in the software or hardware, we cannot inject it properly on the ground without damaging costly equipment. So we simulate this kind of event with rigorous testing of the software components. Later in the validation phase, we continue testing the software with in-house simulators or other commercial ones to prepare for the mission.” 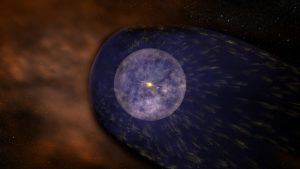 NASA’s Interstellar Mapping and Acceleration Probe, or IMAP, will help us better understand the nature of interplanetary space, which is dominated by a constant flow of particles from the Sun called the solar wind. Source: NASA/Goddard Space Flight Center Conceptual Image Lab

On Schedule to Power GLOWS Beyond Earth’s Orbit

KP Labs’ development for GLOWS is on budget and on schedule. With a steady string of software releases already deployed to fulfil basic mission requirements in telemetry, commands, detection, collection, and analysis of scientific data, the team is on track to deliver the product needed for the integration tests in 2023.

“With these kinds of large mission systems, everything evolves along the way as new details of other instruments and spacecraft emerge. However, thanks to the interdisciplinary team of professionals at KP Labs, we can truly collaborate with the CBK PAN as valuable industry partners to influence and co-design the strategic decisions for GLOWS at the level of hardware, software, and architecture. These collaborative co-design sessions with the CBK PAN are also critical to anticipate features in the IMAP mission and communicate it to the other partners” explained Grzegorz Gajoch.

“Given the complexity and critical importance of the flight software for the success of GLOWS, we are delighted to collaborate with KP Labs. The developers at KP Labs are indispensable members of the GLOWS science and engineering team. We are tapping on the competencies of KP Labs needed for GLOWS. At the same time, KP Labs has an opportunity to gather working experience within a large NASA project and collaborate with top world players in scientific experimentation in space,” said Maciej Bzowski, the Principal Investigator of the GLOWS experiment and professor at CBK PAN.

The opportunity to contribute to an international mission inspires many at KP Labs. Gajoch concluded,

“What personally inspires me right now about my work at KP Labs is that we are developing the software that will fully control the GLOWS instrument, so the software needs to be reliable to control everything on the instrument and do so autonomously. It’s inspiring because we’re contributing cutting-edge software to an important international science mission beyond Earth’s orbit.”

CBK PAN is an interdisciplinary research institute of the Polish Academy of Sciences, established to conduct scientific research and activities in order to advance the space industry in Poland. The six main research fields of activity at CBK PAN are: Sun physics, study of planets and small solar system bodies, interplanetary space physics and astrophysics, plasma physics, planetary geodesy and geodynamics, and Earth observation. Since the institute’s establishment, its researchers and engineers participated in over 50 space missions and constructed more than 70 unique instruments for space missions. The first devices were built under the umbrella of the Intercosmos program and were placed on the Soviet satellites (JONOSONDA, ACTIVE, APEX projects) and the space station MIR (device VIEWFINDER for the Priroda module).

GLOWS (GLObal solar Wind Structure) is one of the experiments on a NASA mission IMAP (Interstellar Mapping and Acceleration Probe), scheduled for launch into a Lissajous orbit around the Lagrange point L1 in 2025. The objective of GLOWS is to investigate the global heliolatitude structure of the solar wind and its evolution during the solar cycle. Additionally, GLOWS investigates the distribution of interstellar neutral hydrogen (ISN H) and the solar radiation pressure acting on ISN H.

A picture containing icon Description is  automatically generated  The implementation of the GLOWS experiment as part of the NASA Interstellar Mapping and Acceleration Probe (IMAP) space mission is financed from the state budget under an agreement with the Ministry of Education and Science.

Written by: Monica Hernandez
Back to entries